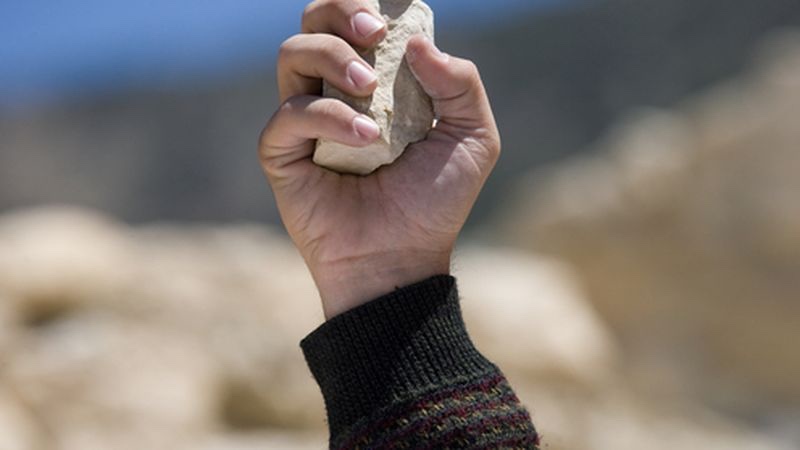 “Now when they heard these things they were enraged, and they ground their teeth at him. But he, full of the Holy Spirit, gazed into heaven and saw the glory of God, and Jesus standing at the right hand of God. And he said, “Behold, I see the heavens opened, and the Son of Man standing at the right hand of God.” But they cried out with a loud voice and stopped their ears and rushed together at him. Then they cast him out of the city and stoned him. And the witnesses laid down their garments at the feet of a young man named Saul. And as they were stoning Stephen, he called out, “Lord Jesus, receive my spirit.” And falling to his knees he cried out with a loud voice, “Lord, do not hold this sin against them.” And when he had said this, he fell asleep.” “And Saul approved of his execution. And there arose on that day a great persecution against the church in Jerusalem, and they were all scattered throughout the regions of Judea and Samaria, except the apostles. Devout men buried Stephen and made great lamentation over him. But Saul was ravaging the church, and entering house after house, he dragged off men and women and committed them to prison.” (Acts‬ ‭7:54-60‬ ‭ESV‬‬ – Acts‬ ‭8:1-3‬ ‭ESV‬‬)

We began this story last week and I focused on the misunderstanding we often have of God and His mission of global evangelism. We saw how He has been working towards this purpose from the very beginning and how, in this passage, He is preparing the church for this mission; Church diversity through global missions. This week the focus shifts from evangelism to severe persecution. That’s like your mother telling you she has great news, and then you find out her “great news” is that you’ve been invited to a formal dance and it’s with your sister. What? Wait! That’s crazy. Who would do that? Who would think taking their sister to a formal dance was a good idea? And who would think that amazing evangelism and severe persecution would go together? Apparently, God does…

The Sanhedrin Council reacted to Stephen’s speech/sermon violently. They were enraged and ground their teeth at him. That’s mad. Really, really mad. While they saw red, Stephen saw the very glory of God and Jesus was standing next to Him. The Council is determined to silence him and nothing, not even the authority of the 10 Commandments, will stop them. Have you ever been that angry? So angry you couldn’t see straight? So angry that you responded in sin?

My primary focus this week is understanding the persecution resulting from Stephen’s death and God’s purpose in it. It is hard for us to grasp the idea that persecution could be purposeful. But in this story we see many of the things that Jesus foretold beginning to come to fruition. Over the past several weeks, Luke has drawn attention to the diverse makeup of the Jerusalem church as indicated by the Hellenist and Hebrew members and their widows. Jesus had told the Apostles that He wanted them to take the gospel to those outside of Jerusalem (see Acts 1:8), but that had not yet happened.

You can view the events that followed Jesus’ proclamation regarding the gospel in Acts 1:8 as either designed or redeemed. Either God purposefully orchestrated and designed the events as described in the last few chapters of Acts as a means to achieve His purpose and goal, or He redeemed the acts of sinful men. By the way, it is also possible that there’s a mixture of both planned and redeemed events in our story. Either way, what I really want to consider is whether the martyrdom of Stephen is purposeful.

I think our primary struggle in this issue is whether God is the cause or source of the struggle or whether He just uses it for His purposes. Ultimately, nothing happens without God’s “permission” but that doesn’t mean God causes the persecution or the struggle. This issue is really the central message of the Book of Job. Job’s friends insist that his struggles are the direct result of his sin, while Job insists that he’s done nothing deserving of his present painful circumstances, and he’s right. In fact, Job’s circumstances aren’t the result of God’s displeasure but are, ultimately, the result of Job’s righteousness. Now, don’t get me wrong. Job was by no means perfect and he had plenty of sin in his life that deserved just punishment from God. But, the story of Job is not about Job’s ultimate innocence or guilt but is about Job’s faith and trust in God even when life made no sense. It’s really about whether Job would trust God in the midst of his struggles. Job did… Will you?

So, that brings me back to our story in Acts. Stephen had been chosen for the “freshman class” of Deacons in First Church, Jerusalem. No doubt, Stephen had a heart for ministry. He’s ministering to these widows and proclaiming the Good News of Christ. Just the kind of deacon every church needs and wants. But suddenly, in just a few short hours, Stephen goes from minister to martyr. He leaves home that morning to go assist with the distribution for the widows and he never comes home. There are three things, in particular, I want you to notice with me…

First, when the Council’s anger at Christ boiled over into a torrent of rage against Stephen, God’s glory was on full display. Scripture describes death as the “enemy” of man and as the antithesis of God’s original design in creation. We are told, “The last enemy to be destroyed is death.” (1 Corinthians‬ ‭15:26‬ ‭ESV‬‬) But, we are also told, “death is swallowed up in victory” (1 Cor. 15:54b) through the resurrection of Christ. So, when death snarls and opens wide its mouth to strike out against believers then we must look closer, peering intently into the very jaws of death and we, too, will notice what Stephen noticed… the Glory of God on full display. Will all of us see the very thing Stephen saw? No, but we will be given a comforting vision of God’s glory and Christ’s victory.

Second, as death snarls, bares its fangs and threatens then Stephen sees the doorway through which believers pass from death unto life. Instead of being fearful in the face of death, Stephen is able to say with confidence; “Lord, into your hands I commit my spirit.” The resurrection had stripped death of its power and given Stephen the confidence to step towards Christ even as death lunges… I found this paragraph by John Piper the perfect description of what is happening: “It is as though you are dying in a small cabin in the woods. The door is death and you are moving toward it inch by inch. As it opens, there is a huge, ravenous wolf with bared fangs and furious eyes. At first you are terrified. But then the Holy Spirit opens your eyes, and behind the wolf you see Jesus shining like the sun. He is standing with his arm extended to you and his face smiling. And hanging tight in his other hand there is a brass chain that leads to an iron collar on the wolf’s neck. You hesitate for a moment. But then the Spirit gives you strength, and as you put your foot in the threshold and the mouth of the wolf opens, Jesus flings him with a mighty jerk clear out of sight, and you enter into the presence of the Lord of glory.” That, my friends, is how a believer moves from death to life.

Finally, while Stephen stares into the mouth of death he demonstrates the glory of God as he prays for his persecutors. As the stones pummel him and he begins to physically succumb to the stoning, he falls to his knees and cries out a prayer for his persecutors. His words are an echo of Christ’s crucifixion cry, “Lord, do not hold this sin against them.” This is a moment of solemnity and stark contrasts. Those who throw the stones consider themselves spiritually superior to Stephen, even self-righteous in their false accusations and blatant disregard for the very Law they claim to hold in such high esteem. Yet this humble servant follows his Master’s example and asks the Heavenly Father to keep this act from being placed on their “balance sheet”, so to speak. Lord, don’t hold them accountable for this sin. They don’t know what they’re doing.

So, what does all of this mean to you and me? Are we willing to understand the truth of scripture while embracing the call to action it makes upon our lives? As we’re moved to action, will we embrace the challenges to proclaim the gospel without flinching in the face of death? Up to this point, the Jerusalem church had not willingly ventured beyond Jerusalem but God was at work in ways the church was unable to fully understand. Are we willing to be stretched in our understanding of God’s will in ways that challenge us and our comfort zones? There are certainly many things we don’t know or understand. We don’t even know what is going to happen to us today, or this week…but we do know this: when we get in a confusing situation, we can ask God, and He has promised to give us all the wisdom we need (James 1:3). When we are anxious, He will give us peace (Philippians 4). When we feel lonely, He will be with us (Matthew 28). When we are weak, He will be strong on our behalf (2 Corinthians 12).

Let me end with a simple reminder. God doesn’t redeem you and make you a part of this incredible journey because you are worthy or because you are necessary. He does so simply because of His love and grace. While you are precious to God, you and your comfort are NOT the purpose for God’s existence. That’s backwards. God doesn’t exist for your benefit, You exist solely for God’s purpose and glory. Think about that… and consider this quote: