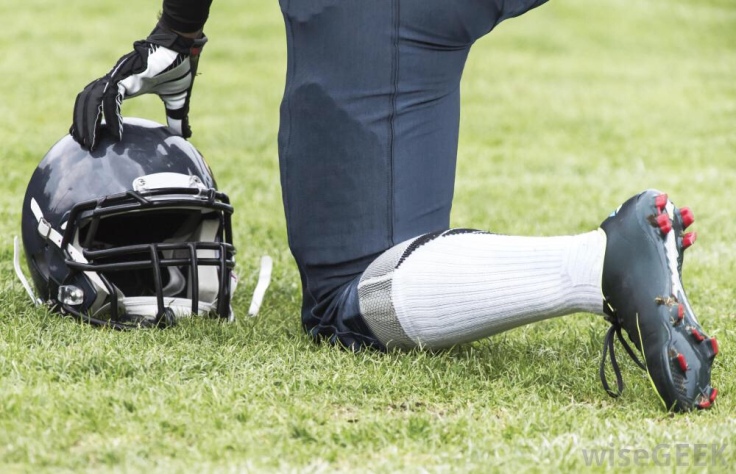 “When Jesus had spoken these words, he lifted up his eyes to heaven, and said, “Father, the hour has come; glorify your Son that the Son may glorify you, since you have given him authority over all flesh, to give eternal life to all whom you have given him. And this is eternal life, that they know you, the only true God, and Jesus Christ whom you have sent. I glorified you on earth, having accomplished the work that you gave me to do. And now, Father, glorify me in your own presence with the glory that I had with you before the world existed.” (John 17:1-5 ESV)

There has been much debate over the past few years regarding the decision by some NFL players who have refused to stand or have taken a knee during our national anthem as a sign of protest. Their actions have been ridiculed by many and hailed or lauded by others. I’m not really wanting to debate their actions or criticize their motives, right now, I’m simply noting that their outward physical actions are seen as a highly negative statement by some and as a deeply positive and powerful expression of their beliefs and emotions by others. (Here’s an article by Kareem Abdul Jabar that is very well written and speaks to some of the issues.) In other words, what we do and how we act matters. It implies something deeper about who we are and what we believe.

In today’s passage, Jesus has finished giving last minute insight to the disciples and then He turns to prayer. I believe this passage gives us incredible insights into Jesus and His deity and, because of who He is, incredible insight into God and His love for us.

In the opening line, Jesus turns His eyes towards heaven and begins speaking or praying to God. Scripture gives us several ideas about physical positions during prayer, but also tells us that our attitudes and our intentions are extremely important (see Matt. 5:5-8 for example). We have examples of standing, kneeling, and of being prostrate before God in prayer. We also have examples of lifting our hands, covering or uncovering our heads (depending on gender), facing Jerusalem, bowing our heads and, as in this example, lifting our eyes towards heaven.

It becomes obvious, very quickly, that our physical position and actions during prayer should be a reflection of our spiritual attitude and intentions. Prayers of deep contrition and need are most often offered prostrate before our Holy God. Prayers of humility and obedience are often offered as we, the creature, kneel before our creator. Prayers of praise and rejoicing are often offered with outstretched or uplifted hands and eyes turned towards heaven as we gaze lovingly towards the Father. And, as you may have noticed in this passage and in my choice of nouns, our names or terms for God reflect our position, intentions and emotions.

In addition to position, we should also take note of our surroundings during prayer. Generally, we are encouraged to pray privately. Jesus specifically cautions the disciples about public prayer offered for the benefit of others who might be listening (again, see Matt. 6:6). If our actions or prayers are “performed” for public awareness and recognition then we’ve missed the point and will miss out on God’s recognition of our obedience. We will have received our reward from man and will not receive anything from God. Ouch! It hurts when scripture hits you right in the nose with the truth.

Now, don’t misunderstand this admonition. God expects us to live out our faith in our daily, public actions. What we believe should be clearly reflected in what we do. But, why we do it is just as important as what we actually do. When the Pharisee of Matthew 6 stood up to pray in public, his prayer was obviously not about obedience to God but was all about personal recognition before men. So, here’s my point about “taking a knee” by these players… it is less about what they are doing in public view on the sidelines before the game and more about what they are really doing off the field before and after the game to right the wrongs about which they are protesting.

What does that have to do with you and me and our Christian faith and daily walk with Christ? Everything. Our actions speak loudly about our beliefs. Often, what we do is simply for public recognition and honor. If my public prayer is simply offered up for others to hear, then it is pointless and powerless. If my acts of kindness are posted to social media for all to see then I’ve received all of the praise and recognition I will ever receive. However, when we live our lives in quiet, humble obedience and our actions and relationships are reflective of God’s grace and love then God will be glorified and the world will be left wondering and asking why. (See 1 Peter 3:15)

I am a member of the local Lions Club and have been for over 20 years. Initially, I joined and attended because it was required by my job at the university. However, God has taught me several things about faith through my affiliation with the club and its members. I have one friend who is occasionally asked to pray before our meetings. His prayers are simple, direct and very personal. He prays to Jesus as if he’s talking to a friend. No religious words or pompous attitudes, just simple and honest words. I know a few people who might find his method of praying as irreligious. But, his praying humbles me. I find that my prayers are too formal and, shall I say, dishonest and prideful just like the Pharisee of Matthew 6 fame. What about you?

Notice that Jesus simply begins to have a conversation with His “Father.” This is an intimate and personal conversation that the Holy Spirit has given us the privilege of getting to hear. Jesus isn’t saying these words so that he can revel in the glory of men or so that others will praise Him, though He deserves ALL praise. He is saying to God, “Father, the time has come for you to be glorified through my obedience. I’ve completed the work you gave me, now use my obedience to bring you glory!” What we could learn from those words!

I think this is one of our biggest struggles as believers, and one of the biggest deterrents to non-believers. They hear our words, but see no change in our actions. While the non-Christian world certainly has a warped view of scripture and its teachings, they can clearly see that our actions and words are often at odds with our professed beliefs.

We loudly proclaim a high view of human life as we protest and lobby against abortion, as we should. But, they scratch their heads and question our true beliefs or views when we turn our backs on immigrants and refugees out of fear. Why are babies in the womb more precious to God than refugee children? Why is an unwanted baby in the womb more worthy of our care and concern than a hungry, young illegal Mexican immigrant? While I doubt that any of us would ever truly say that they are, our actions and political choices speak loudly.

Jesus demonstrated for us what a life committed to God’s glory looks like. He showed us how our life choices must be reflective of our beliefs. He took his own will and placed it in subjection to the Father’s will (Luke 22:42) so that God would be glorified through His obedience, whether in life or death. He now calls you and I to do the same, for God’s glory. He clearly knows and states that He has “authority over all flesh” and that includes our physical bodies and our physical actions.

Our modern culture clearly embraces a worldview that says what we do with our physical bodies should be determined by our own feelings and desires. In fact, modern sexual, marriage and gender rights are being based on that very principle. Yet, Jesus loudly proclaimed that He has authority over the physical as well as the spiritual, emotional and mental. As a believer, He has full authority over your physical existence and your choices. How you use your body should be reflective of that authority. In other words, if you are a Christian you don’t have a “right” to do as you please physically but you have an obligation to do what pleases God (see Romans 8:3-8).

What are the implications of that authority? It would be easy to speak in general terms, but I fear you might miss my point. So, I’ll be specific…

I started out today by referencing a group of young men who have chosen to silently protest the actions of some who hold a low view of human worth and dignity. Whenever the words or actions of one demeans the value of another, regardless of the reason, he has violated a holy law. If one human physically, emotionally or verbally abuses another because of his race or beliefs then he has violated God’s law. Such actions should be protested by all of mankind. However, if someone truly holds this belief in the value of human dignity and worth then he ought not protest silently. He shouldn’t just take a knee or refuse to stand, He should act… and so should you and I. 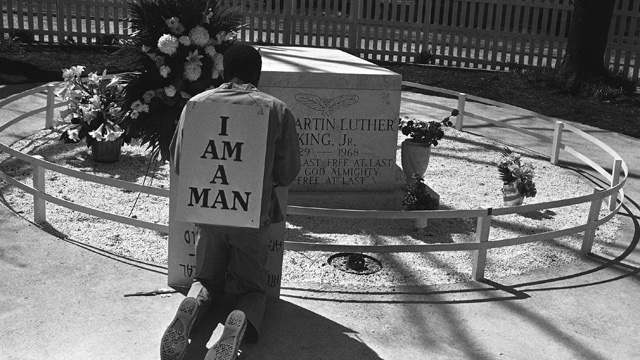 “What good is it, my brothers, if someone says he has faith but does not have works? Can that faith save him? If a brother or sister is poorly clothed and lacking in daily food, and one of you says to them, “Go in peace, be warmed and filled,” without giving them the things needed for the body, what good is that? So also faith by itself, if it does not have works, is dead.” (James 2:14-17 ESV)

Our beliefs and submission to the lordship of Jesus Christ should never leave us silent in the face of evil or suffering. It should incite us to action and even sacrifice. The Church of Jesus Christ should be a place where people of every ethnic background and social status can find love, acceptance and forgiveness. Our beliefs MUST be more than mere words in an ancient book or creed. They must be actions that result in God being glorified and Jesus being trusted and worshipped. Such actions will, undoubtedly, result in conflict and confrontation with some but questions and faith in others. The outcomes are not of our doing and not our responsibility, but His…

“I have been crucified with Christ. It is no longer I who live, but Christ who lives in me. And the life I now live in the flesh I live by faith in the Son of God, who loved me and gave himself for me.” (Galatians 2:20 ESV)

In conclusion, taking a knee is a symbol of submission. It is often done during prayer or worship. But submission is NEVER done in isolation. It is always joined to obedience. To submit to God in repentance and salvation and then to refuse obedient action is to lie and to deny the authority of God. Do not proclaim Jesus as Lord and then deny Him authority over your body and your actions. To do so is to lie and not truly submit. So, take a knee…