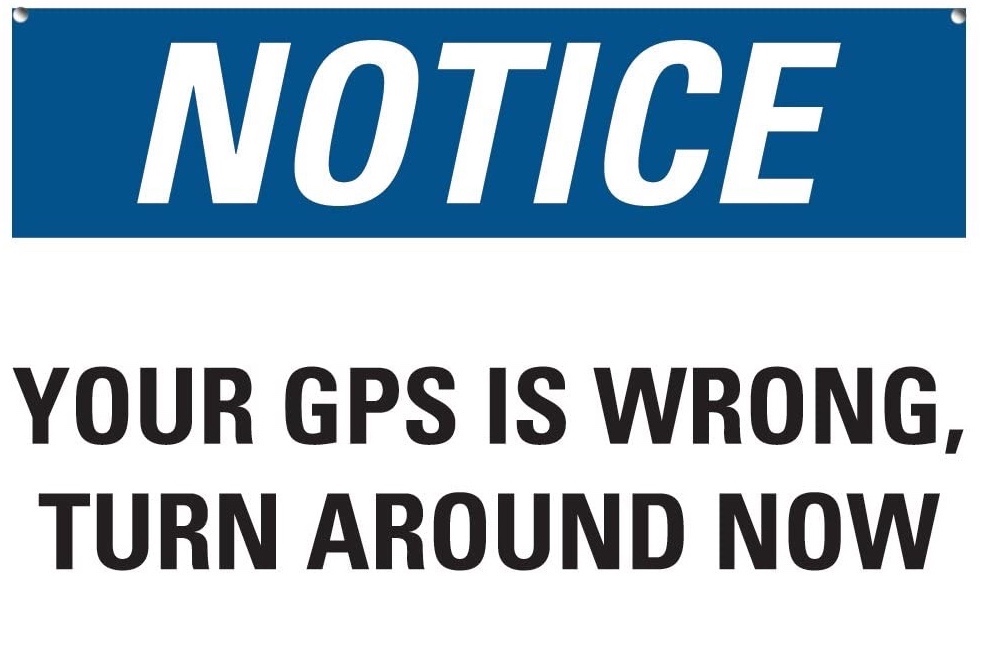 “What then? Israel did not find what it was looking for, but the elect did find it. The rest were hardened, as it is written: God gave them a spirit of insensitivity, eyes that cannot see and ears that cannot hear, to this day. And David says: Let their feasting become a snare and a trap, a pitfall and a retribution to them. Let their eyes be darkened so they cannot see, and their backs be bent continually.” (Romans 11:7-10 HCSB)

One of the great things about living in a technological world is the ability to find almost any location or physical address using GPS and your smartphone. Just type in the address or ask Siri/Google to locate the address for you and technology goes to work, searches, locates and then gives turn by turn directions to the location. Well, most of the time. Have you ever ended up lost because your phone sent you to the wrong place? I have, on several occasions. Sometimes it is due to new road construction or just remote, rural locations that have limited data and references. You end up on the wrong road, in the wrong neighborhood or even in the wrong town. Your smartphone is only as smart as the software that drives it and the data that informs it.

In a similar fashion, it is even more incredible to be able to find God and His purpose for our lives using His Word and the power of His Spirit. We are able to read, study and discover God through the truths He has provided and the direction and teaching given to us by His Son, Jesus. However, we are also capable of remaining confused and spiritually lost and separated from God when we refuse to follow the truths and direction given to us by God’s Word, demonstrated and affirmed by His Son and imparted through the working of His Spirit in our hearts. In other words, God may provide insight, direction and even prod us along the path towards encountering and trusting Him for salvation but we often take intentional wrong turns and end up straying far, far from God. You might question this, but let me see if I can illustrate…

It is not uncommon for me to request directions to a location from my phone even when I know how to get there. Sometimes I do this as a means to get up-to-date travel conditions or traffic congestion issues that might be occurring. For example, I work in Oklahoma City and can easily take one of three different routes to my office. Each one takes a different highway but are all within a minute or two of the same travel time and distance. Usually, the route I take to work early in the morning is the same day after day and I rarely have any traffic issues except in areas where highway construction is occurring or if an accident occurs that blocks traffic. However, the route home in the evening is much different. I tend to encounter many more issues and they change from day to day. So, I’ll often do a quick search using Google maps for the best route home from the office and Google will even offer route changes mid-trip as traffic conditions change.

However, there are times when Google makes a mistake or I refuse to follow her guidance on which route to take. In those cases, I often end up taking a much longer, slower route or I simply get frustrated and turn her off and attempt to navigate my way home without her guidance. On one particular occasion, I was using Google to find my way to a particular WalMart location to pickup a package that my son had ordered. I thought I knew where I was going and which store and I argued with my GPS during the entire trip. I thought it was taking me to the wrong store or, at the very least, in a very slow and odd route using back roads. However, I was entirely wrong and Google was entirely correct. Not only did it take me to the correct store location, it took me on the best route to avoid construction issues and slow traffic.

Now you might be wondering why I used a long and drawn out travel illustration using GPS/smartphone guidance to introduce our focal passage, this week. Here’s why… “Israel did not find what it was looking for, but the elect did find it.” Israel passionately sought God, but ignored the knowledge and widsom provided through Moses, the Prophets and the Wisdom books of Scripture on which route to take and which hazards and wrong turns to avoid. Notice Paul’s contrast between Israel and the elect, Israel sought God with passionate zeal (see 10:2) but didn’t find Him and the elect sought God through simple faith (see 10:6) and did find Him. The difference was not the passion that drove them to seek Him but the source of righteousness they would offer up to Him, their own righteousness or God’s as revealed in the obedience of Christ (see 10:3-4). Israel had eyes to see the path of faith in God, but refused to see. They had ears to hear the wisdom of the Word of God, but refused to listen.

What happens when we seek God using our own methods or faulty directions? We remain lost, wandering alone and hopeless. Like ethnic Israel, we have been given insight and wisdom through God’s Word and the life of Jesus but we are often blind to those truths and determine we can find God following our own “directions and methods.” Instead, we just become more confused and more profoundly lost in a spiritual desert. Perhaps you’re wondering what I mean when I say “using our own methods or faulty directions” to find God, so let me be a bit more specific.

First, we often listen more to our culture regarding the “right way” to God than we listen to God’s own Word. Some attribute this to how “old and out of touch” they consider scripture to be, but that’s just an excuse. Scripture is only considered old and out of touch when it conflicts with or contradicts current culture. They don’t reject God’s Word because it’s old but because it conflicts with their pursuits and desires. Paul addresses this in our focal passage, “the elect did find it. The rest were hardened…” The elect found what they sought (God) using the truths revealed in His Word and in the life, death and resurrection of Jesus.

The rest were “hardened” towards God. This word is a passive medical verb that was used to refer to a “stone” that has developed in the bladder/kidney or what happens to a bone that has been broken and grows back together. The idea is that it happens as a result of the conditions without express intent or cause by the person. God has spoken and revealed the truth about how to find Him, but some ignore it and go their own direction and that results in a gradual and specific hardening towards God and His truth as a result of their choice to turn a deaf ear to the Word of God and a blind eye towards the Way of God.

Paul goes on by quoting Moses (the Law) and Isaiah (the Prophets), “God gave them a spirit of insensitivity, eyes that cannot see and ears that cannot hear, to this day.” They’ve fallen into a “spiritual sleep” and are unable to hear or understand the truth or the reality of God’s revelation. The truth of the Resurrection had slapped them in the face, but they refused to wake up to the reality of Jesus as the Messiah, the Son of God. There are still many today who have fallen into this deep spiritual sleep and refuse to be awakened by the truth of Scripture and the fact of the Resurrection. They sleepily stumble along their own path away from God, completely ignoring His call to awaken to the reality of the truth.

Next, Paul appeals to David (the Writings or Wisdom literature) as he quotes Psalm 69: “Let their feasting be a snare, a trap, a pitfall and retribution… let their eyes be darkened and their backs bent continually.” This reference is clearly intended to draw attention to ethnic Israel’s attempts at religious obedience and moral righteousness as a means to receive God’s blessing and favor. Their ritual obedience to the law (their feasting) has ensnared them, become a trap or a pitfall to keep them from receiving God’s grace. The law can only serve as a path to rightesousness when it is obeyed absolutely, completely and continually. Israel has NEVER been successful at achieving this obedience but their personal pride has blinded them to this fact and their need for God’s grace.

The statement “their eyes darkened… and their backs bent continually” is a reference to this blind effort to work and earn God’s favor and blessing instead of trusting God and receiving His gift of righteousness and forgiveness by faith. They are continually bent under the load and strain of their ineffective efforts at pleasing God and obtaining rightesousness. Like the Exodus, God has provided the means by which they are delivered from slavery to sin – the life, death and resurrection of Jesus their Christ/Messiah – but they are blinded by their own efforts and their ongoing effort has become God’s retribution (fitting judgment).

In the same way, there are many who still approach God this way. They are unwilling to receive God’s gift of grace and forgiveness through Jesus and continually seek to achieve God’s favor through some religious ritual or effort. This describes EVERY non-Christian religion in the world – man striving to achieve God’s blessing and favor through moral or spiritual effort. Faith in Jesus reverses this approach. Man is unable to reach God, so God reaches down and embraces man in love. Since we are incapable of being morally or spiritually perfect, God has fulfilled the His own demands and offers grace and forgiveness through faith in Jesus life, death, resurrection – His righteousness.

So, instead of heading off in search of God using your own methods, your own religious rituals, your own knowledge, your own insight and good intentions – STOP, listen to God’s Word and His Spirit and get back on the path of faith. Trust God. Listen to His Word. Follow Jesus. Recognize that your own efforts have only left you frustrated, lost and feeling alone because that’s all they can do. But you also need to recognize that if you continue pursuing your own efforts af finding God, you’ll only grow increasingly blind, deaf and ensnared in your pointless pursuits. If you continue on your path, you’ll not only remain a prisoner to your frutiless efforts you’ll also miss God, completely.